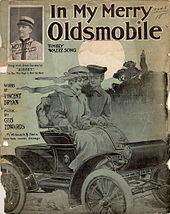 Throughout the veteran car era, the automobile was seen more as a novelty than as a genuinely useful device. Breakdowns were frequent, fuel was difficult to obtain, roads suitable for traveling were scarce, and rapid innovation meant that a year-old car was nearly worthless. Major breakthroughs in proving the usefulness of the automobile came with the historic long-distance drive of Bertha Benz in 1888, when she traveled more than 80 kilometres (50 mi) from Mannheim to Pforzheim, to make people aware of the potential of the vehicles her husband, Karl Benz, manufactured, and after Horatio Nelson Jackson’s successful transcontinental drive across the United States in 1903.

The 1908 New York to Paris Race was the first circumnavigation of the world by automobile. German, French, Italian and American teams began in New York City February 12, 1908 with three of the competitors ultimately reaching Paris. The US built Thomas Flyer with George Schuster (driver) won the race covering 22,000 miles in 169 days. While other automakers provided motorists with tire repair kits, Rambler was first in 1909 to equip its cars with a spare tire that was mounted on a fifth wheel.